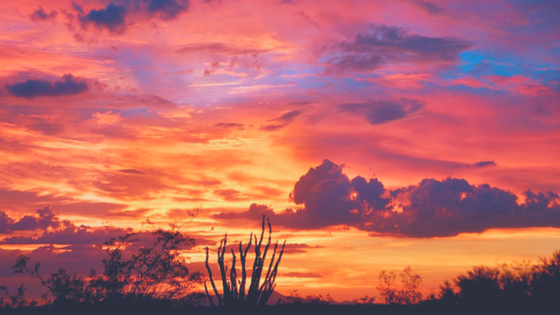 That’s right, folks: Arizona’s monsoon season is upon us once more, which means that we’re all going to have to buckle in for the kind of inclement weather that us desert folk usually get to avoid. Haboobs! Downpours! Tornado warnings! More downpours! An exciting time for everyone.

So before the clouds roll in and precipitation spikes, we have for you some facts on this annual phenomenon. They may not necessarily help you breeze through the next few months entirely unscathed, but you’ll at least feel more knowledgeable while having gallons dumped on your head. Which has to be worth something, right?

1. Mark your calendars: Monsoon season begins on June 15 and ends on September 30.

Before 2008, these dates weren’t actually set in stone. Rather, the season would only be declared when Phoenix had three consecutive days of a dew point average above 55 degrees — something that tended to happen around early July and last for a subsequent two months. The National Weather Service eventually decided to take the guesswork out of these start and end dates and settled on the above duration; not because it was more accurate, but simply because it took the focus off of semantics (“Can we consider this a monsoon? No? Can we consider THIS a monsoon?”) and placed it on safety measures and proper preparation. It’s a period that extends well past the typical time we can expect actual storms but gives everyone more time to get ready and stay alert.

Some figures for comparison: the earliest start for the season was in 1925 on June 16, while the latest was in 1987 on June 25th. The record number of consecutive “monsoon days” for the area occurred in 1984, during a stretch of 72 days between June 25 and September 4. How will this year compare? We’ll have to wait and see.

2. To understand Monsoons, you need to know about dew point, that’s dew point, not Dupont and not Mountain Dew.

The dew point is a measure of how much moisture in the air and reflects the temperature at which the air needs to drop in order for that moisture to condense.

Okay, so this isn’t strictly a fact about monsoons, but it is a related one, and important to understand why the season starts when it does! Since the amount of moisture in the air is always varying, the dew point is always in flux, and the temperature at which it will start to form clouds and rain varies from place to place (even within Arizona), but Phoenix has historically been attached to 55 degrees: once the dew points hit that mark consistently, the surface heat of the desert and the more humid air are most likely to create the thunderstorms that mark a monsoon.

3. “Raindrops keep falling on my head…” – The rain that monsoon season brings may be inconvenient for some of us, but it’s important to local systems and wildlife.

The typical rainfall during this period is somewhere around 2.6 inches, but there have been heavy deviations in both directions in the past: 1984 saw over nine inches, while 1924 received a scant .35 inches. Either direction can be dangerous for Phoenix residents: high rainfall can lead to flooded roads and homes, while lows can mean later droughts and higher fire hazards. A good half of the state receives almost half of its annual rainfall during this period, so just how much wet we get can have implications for the rest of the year: this rainfall replenishes basin groundwater, revitalizes normally dry streams and rivers, and spurs plant growth to keep them healthy during dryer months, when grasses, shrubs, and flowers are necessary food sources for migrating birds, cattle, bats, tarantulas, and Gila monsters.

4. Monsoon rains trigger the start of some unique Phoenix specialties.

All of this uncharacteristic moisture kicks off some special reactions in Arizona’s flora that we don’t normally get throughout the year:

First, there’s that smell that everyone loves so much after a storm. Most people know of it — it’s called petrichor, but there’s a particular variant of it that’s special to desert regions. You can thank the creosote bush for that: a plant and medicinal herb that is able to inhibit the growth of plants around it to secure more water. Its greed is our gain, however, as its leaves use a coating to conserve the water that emits that familiar, musky scent that we all know and love.

Then, there are the cacti. Plentiful rain allows the prickly pear cactus to bloom not just flowers, but food, too. Called “tunas,” these bulbs can be harvested in September and used in a variety of consumables, including soups, jellies, tacos, salads, and more.

And here we are at the end of our lesson. Do you feel a little wiser? A bit more prepared? Probably not, but when in doubt, you can always stay indoors and watch television. Wet days and windy nights are ahead of us, so get ready! Make sure your patio is covered, your roof is patched, and your trees aren’t growing too close to your house, and you should be just fine.

So what are some of your favorite, or not so favorite things about monsoon season here in the Valley of the Sun? Let us know in the comments section below.